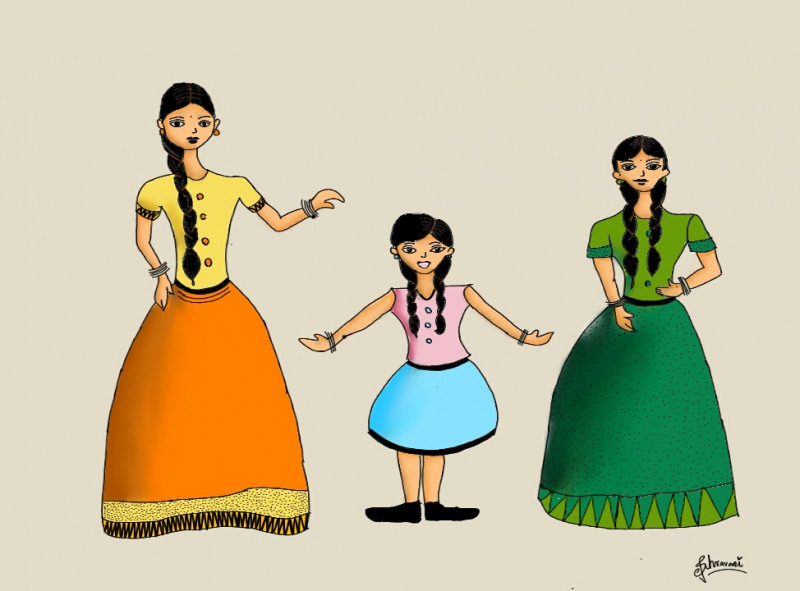 My cousin Savitri was just seven months older than me. One day, my mother told me that Savitri was now a ‘big girl’. I immediately understood what she meant. I was definitely not as innocent and foolish as I had been 2 years ago. I had a vague idea about it. She said it happened quite early for Savi and it would happen to me too, maybe in the next few years. She hoped that it would not happen to me as early as it did for Savi.

Savi and Deepak were my Veena aunty’s kids. She was my father’s sister.
One summer vacation, Veena aunty couldn’t come, but she sent them with their grandfather. Deepak was a year younger than me. Whenever we were together we were a tight team. We would do hundreds of things together – swimming, climbing trees, playing cards, cycling, reading comics and what not. My neighborhood friend Kinni was another member of our team. We had planned so many things for this vacation.

I saw Savi after a year. She looked a lot taller, maybe because she was wearing a long ankle-length skirt. This time, their grandfather – Dada came with them. He used to come once in a year or two to take care of his ancestral home which was in a nearby village. We greeted him by touching his feet.

When my mother touched his feet, he said “Ashtaputra saubhagyavati bhava”. I knew the meaning of these Sanskrit words, ‘May you be blessed with eight sons’. I was standing behind my father. I started giggling, imagining eight small boys playing around my mother.

Dada said, “Who is this? This must be Minu! Come here.”

He gave me a box of sweets prepared by Veena aunty. Keeping one hand on my head he said to my father, “In a few years both your daughters will go with their husbands. Then who will be there with you? Who will carry your family name forward? You must think of this.”
My father smiled and said, “Dada, please come in this room and relax. When are you planning to go to your place?”

Later in the evening, I heard my mother talking to my father, “Thank God. Veena has a son. Otherwise, I can’t imagine how many times she would have faced pregnancies to just have a son!”

The next day Dada went to his village for a week. Two days later there was a small get-together at our place. Niru aunty and Ravi uncle had come to us with their kids Shefali and Varun. They were accompanied by their twin nephews.

Niru aunty was Veena aunty’s best friend and Ravi uncle was my father’s school friend.  Varun was of my age. Shefali and her twin cousins were 4 years older than me, but they were very friendly. The twins showed us some card tricks. It was fun.

Savi didn’t come out of the room. She was not ready to play with us. Everybody called her, but she insisted on reading a book. I got irritated. When all of them had gone, I went to her and asked her what was wrong with her. She said her grandfather had strictly told her to not mingle with strange people; especially with boys or men and he would definitely ask Deepak what she did.

When my parents heard this they were annoyed and sad. They tried to cheer her up. Despite that, the entire vacation, Savi spent more time with Sangita, Kinni’s elder sister than with the three of us. I felt as if she was imitating Sangita in all her ways. Weird she was!

Kinni, Deepak and I finally started ignoring her and our trio enjoyed the vacation to the fullest.

One day, after they’d left, Sangita asked me if I had noticed that Savi had been wearing only long skirts and not frocks like little girls. I had noticed it and thought that it was a new fashion in her town. But Sangita told me that Savi’s grandfather wouldn’t allow her henceforth to wear frocks like me or Kinni because now she was a big girl.

I said “Savi didn’t tell me anything like that. She loves to wear frocks. Her old frocks don’t fit her because she is taller. I know because she ismy cousin. She will wear those skirts only for the time being. My Veena aunty will stitch her new frocks. And by the way, who is her grandfather to tell her what to wear and what not to wear?”

She gasped. “You are very rude Minu. You don’t understand a thing. And that’s why she didn’t tell you. You moron, he is telling her this for her safety!”
“Hey don’t call me that. I will tell your mother. And how do long skirts give more safety than frocks?”
“They do! That’s what my mother told me.”
“But how?”
“I don’t know.” She seemed confused.
“But Savi is going to wear frocks because she loves it!” I started shouting.
“SHE WILL NOT!”
“SHE WILL.”
“SHE WILL NOT!”
She started laughing, “And you know what? You and Kinni will also wear such long skirts from next year.”

That was a big blow to me. I was about to cry.
She continued, “And look at you. You should not sit like that spreading your legs. Sit properly.”
Now, this was too much.
“Aw wee wee,” I taunted, “and what about Sharad? See how he is sitting in that chair.”
Sharad was her 5-year-old brother.

She couldn’t control her laughter.
“Are you crazy? He is very small. And most importantly he is a boy. Boys don’t have to do such things like us. Kinni, tell your friend, she is a baby.”
This time Kinni took my side. “You shut up. I am not going to tell her anything. We will do what we like to do.”

I was so happy that Kinni supported me. I hugged her. Both of us made faces at Sangita and ran out into the backyard to hide from her.