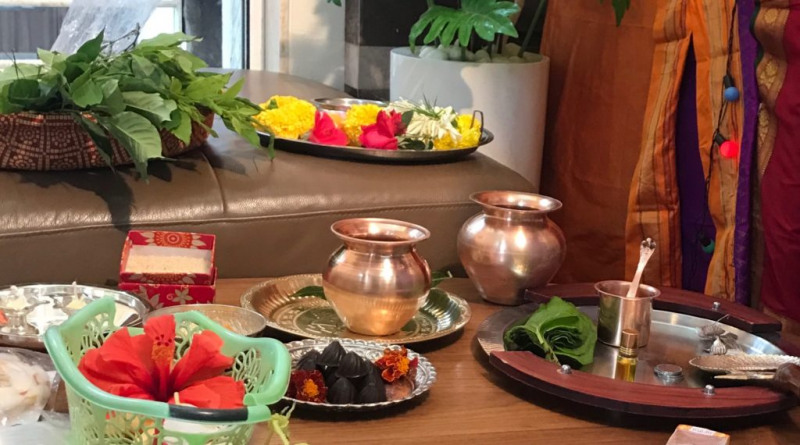 It was a beautiful morning. It had just stopped raining and the sun’s rays cast a golden green glow everywhere. Sangita, Kinni, Sonu and I were busy plucking flowers and leaves from the gardens of the entire neighborhood. We were collecting it for today’s Hartalika Puja. It was a holiday for us.

We were enjoying the wet smell of green grass and varied scents of leaves and flowers. Sonu was squealing when she saw caterpillars crawling on tree trunks. We were continuously chattering and laughing. Our baskets looked wonderful with colorful flowers and green leaves. But it started raining again so we ran back to the house.

I helped mother make decorations with the flowers and leaves. She told me the story of Goddess Parvati as she used to tell me every year on this day. Parvati wanted to marry God Shankar, so she fasted; didn’t eat or drink anything – not even a drop of water. Shankar was moved by her faith and worship, so he married her.

From that day, all women kept a fast on this day.  It was believed that whoever did so would get a good husband, or in the case of married women, the same husband in their next lives.

I decided to keep a fast too.  Until last year, I’d never really bothered myself with such things. But now, I was 11 so I felt like behaving maturely like my mother. When I’d asked her about fasting the previous evening, father was also sitting there.

He said, “Minu, you will have to eat very less as it’s a fasting day. You won’t be able to eat regular food.  Ummm actually, I was planning to take you and Sonu to eat bhelpuri tomorrow. Now, if you are planning to keep a fast; I will take only Sonu—”

“Father no, not tomorrow, please father please!“ I started protesting, before realizing that he was pulling my leg.
I started laughing, “Father, you always do that!”
“And you are always a late current!” he said, laughing.

In the morning Sangita told me she’d decided to have only fruits the entire day.
She said, “Next year I will have only water. Nothing else.”
“Really?” I was very impressed. How could anybody remain without food the entire day?
“Of course. Don’t you remember what Parvati did for Shankar? She didn’t even have water.”
I felt Sangita was really great. She would surely get a good husband like God Shankar. I decided that I would do the same when I would be of Sangita’s age.

That day, mother prepared a lot of fasting dishes, especially for me. There was sabudana khichdi, different preparations from potato, coconut, cucumber, pumpkins, and fries! It was yummy.
All four of us started eating. After a while, it struck me that father was eating all these items too. There was no regular food.


I was about to ask mother if it was true, but I saw a slight smile on father’s lips. I immediately understood. “Father—!”
“Ok, that was a joke. But what’s wrong if it’s true? I really want your mother in all my future lives.”
“But no man does that,” I said, “and mother is keeping a fast for you so automatically both of you will be together in every life!”
“Oh, that’s clever,” he said, “but you know, I like this food too, so I asked mother to not cook separate food for me. Isn’t it fun?”
“Yesss!” It was fun.
I kept on eating. Finally, mother said, “Minu, you can eat more in the evening. Please stop now. As usual, you will start complaining that your stomach is aching.”

After some time Kinni came over to our place. We had to go to our friend Leena’s as it was her birthday. Both of us had prepared birthday cards for her. We played at Leena’s place for a while. After some time, her mother asked if we wanted to have some cake. We couldn’t control the temptation!

When we came back, Sangita was sitting on the steps. After we told her how tasty the cake was, she exclaimed, “Didn’t you tell her mother you kept a fast? You are not supposed to eat cake today! You broke your fast.”

Both of us were flabbergasted. We didn’t know what to do. I asked Kinni to come to my place to discuss what could be done. She told me she knew if we drank a lot of salted water, we would vomit and all the cake would come out. That way, we wouldn’t be sinners for breaking the fast.

My mother and Sonu were taking a nap. Father was in the hall. Both of us silently entered the kitchen through the back door. We prepared salted water and drank a full glass each. We waited for a while, but without any effect. So we went into the bathroom and stuck fingers at the back of our throats so we would puke. We were making terrible noises, but still, there was no vomiting. Frustrated, we came out of the bathroom and got stunned. Kinni’s father Bapu was standing there. Kinni started crying, “Father, we have sinned. We ate cake.”

He said, “Sangita told me what happened. No need to worry. Come here. I will tell you something. You are small children. You haven’t sinned.”
“Is that so?”
We were so relieved.
“Hmm, yes,” he said, “and if there is any such possibility, I will take everything upon me, so you don’t have to think about it anymore.”

We loved Bapu. He was very understanding! We had been so tensed for the past hour. Now we started chirping like little birds and ran outside in the front yard to play.


When we came out, we saw Shefali and Sangita were sitting on the steps. Shefali was in the same school as us and in the same class as Sangita. She was four years older than us. I always liked her very much. She was very helpful and sweet. Not only was she good at studies, but she could also do classical dance and what’s more, she was the captain of the volleyball team at our school!


I said, “You know Shefali, I kept a fast today.”
She said, “Hmm, so what did you have?”
Sangita said, “Don’t ask. These babies are so fond of food, they eat everything; even on fasting days.”
Kinni scowled at her.
I asked Shefali, “What did you have?”
“We had regular food.”
“Why? You and Niru aunty didn’t keep a fast?”
“No.”
“But all the women keep it.”
“Huh, that’s all humbug.”
We were surprised to hear that.

“Shefali, how can you say such things?” Sangita asked.
“But it’s true,” Shefali said.
“It’s bad to say such things,” Kinni said.
“Hey, It’s not about good or bad. But doesn’t it make you feel that all men are like Gods and the women are their devotees? Which woman with brains thinks like that?”

She patted my head and got up to leave.
“What?“
She laughed, “This is the 20th-century girls. Wake up. I would like my husband to be my friend and not my God!”
I looked at her with amazement as she began walking back.