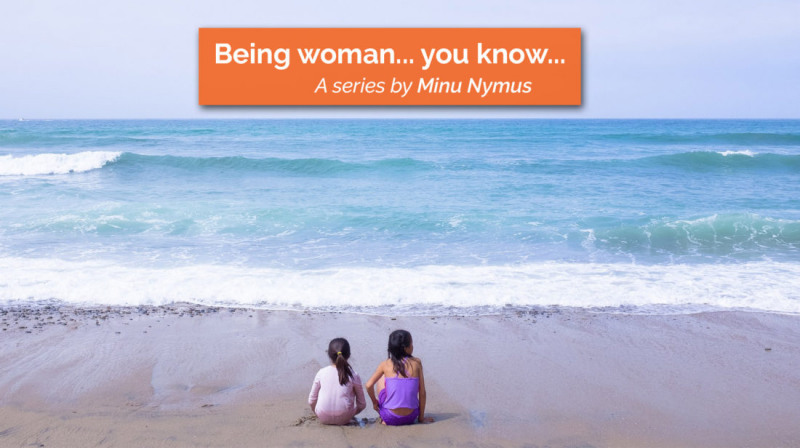 I think I was 10. My cousin Savitri came to us for a visit during the summer vacation. The two of us and my neighborhood friend Kinni were of the same age. We used to play a lot all day long, but one day in the afternoon I couldn’t find both of them, so I started looking. I could hear them talking as I entered Kinni’s house.

Both of them were in the kitchen and Kinni was telling Savi something in a very serious tone. I hid behind the door to listen because I heard my name.

Kinni was saying, “You know, Minu had an elder brother.”

“Shh! Don’t shout,” this was Kinni’s elder sister Sangita.
She said, “He died immediately after he was born. Isn’t that sad? Now Minu has only one little sister.”

Kinni said, “I really feel very sorry if somebody is without a brother. Please don’t discuss this with Minu. You will make her very sad.”

For Savi, it was exciting news but she immediately promised Kinni not to mention it to me. When I entered the kitchen, they started talking nicely with me as if they wanted to console me. I didn’t know how to respond to the whole thing, so I didn’t say anything. But it got me thinking.

I had heard this story from my grandmother and mother. After so many years of the incident, they were indifferent to it. When they’d told me, I was a bit curious but definitely not sad, for I didn’t even see him. Really! Why were Kinni and Sangita making such a fuss about it? Why did she tell Savi that I would be very sad to hear that and why did she feel sorry for me for not having a brother?

You know – until that point, I had never thought about not having a brother. I never thought that it could make any difference in my life because it didn’t. Nobody from my family discussed or mourned or expressed any sentiments about it. But when I heard Kinni that day, her voice filled with so much grief and sympathy for me, I started rethinking.  For some time I even felt sorry for myself and my sister. I kept on playing with them and by the time I got back home I’d completely forgotten about it.

Two days after that it was a Saturday. In the morning my mother insisted on washing my hair as there was sand in it. We girls had very long hair. Sunday was the special day for the time-consuming task of washing and drying our hair. But this Friday we’d gone for a picnic near the river and thrown sand on each other, so Saturday was our hair-wash day. After breakfast, Kinni came over. She hadn’t washed her hair. I asked her how her mother allowed her to come without washing her hair.

She was trying to say it very casually, but I could sense that she was somewhat proud of it. I wouldn’t have bothered, but the conversation that I’d heard two days ago suddenly sprung to my mind. Defensively, I said, “So what difference does it make? What will happen if you wash your hair on a Saturday?”

Ooo! Who was she? My “grandmother”?! I didn’t want to talk to her. I turned around, went inside and didn’t come back for a while.

In the evening, I went to Kinni’s to play. Kinni and her sister, Sangita were sitting together. They started telling me how rude I was. I said I didn’t like it if somebody made me feel bad about not having a brother.

I asked, “Is it my fault that I don’t have a brother?”

Sangita said, “Do you have any idea? In the previous life, if you have done good karmas then only you get a chance to have a brother. So now you tell me whose fault is it?”

Sangita was four years older than me. But still, I could sense that what she was telling me was absolute crap!

She continued, “For any woman, four people are the most important in her life, without whom she would not survive. She is always dependent on them – her father, her brother, her husband, and her son. Brothers are very special. They are always there to protect her. So the women who have no brothers or no sons, are considered very unfortunate.”

I replied, “But I have a sister who will protect me.”

She started laughing. “Girls are very weak. How can she protect you!”

I started shouting, “No she is very strong. And when she will be of your age, she will throw you in the river.”

Their mother was listening in on this conversation. She was a kind lady. She came to me and took me to the kitchen. She gave me her famous guava jelly to eat. It was my favorite. I started eating it immediately.

She said, “Don’t worry Minu. My Sharad is like your brother. So don’t be sad. He will always be there to protect you. I will tell him.”

Sharad was just 4 years old. I got confused as to how he was going to protect me or even his sisters. But because Kinni’s mother felt that I was very sad, she insisted I have more jelly.
So I decided to remain in a sad mood for some time.