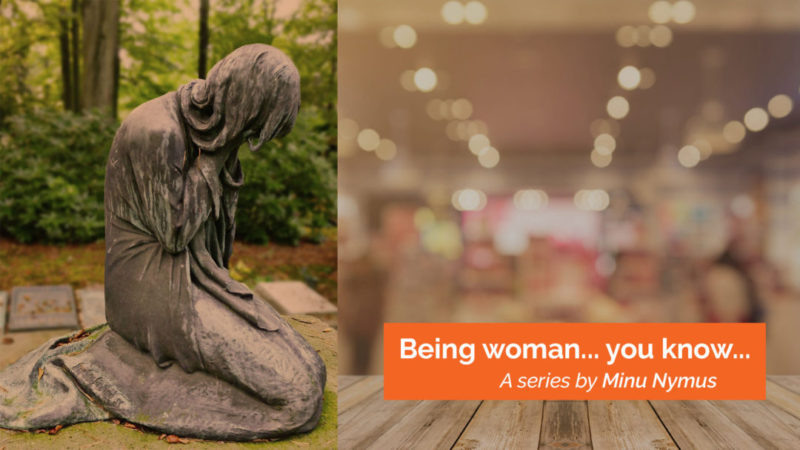 Kinni and I were coming back from school. As we approached her house I saw that it was full of her female relatives. Kinni ran to her house. I went home, threw my bag in my room and rushed out again. Mother was calling me from behind but I was too excited. I always liked if many guests came and I knew Kinni’s aunts and grandmothers very well. A nice, sweet smell was coming from the kitchen. Everybody looked happy.

I saw Sangita, Kinni’s elder sister wearing a very beautiful, Iong skirt with an embroidered blouse. She had flowers in her hair. I walked up to her and said, “Wow Sangita. You are looking so beautiful. Why didn’t you come to school? What’s special today?”

Her grandmother smiled at me and said, “Yes. It is her special day today. She got a mute son.”

All of them started laughing loudly. I knew they were joking because I knew Sangita was not pregnant. But I didn’t understand the joke. I looked at Sangita. I couldn’t read the expression on her face. Even though everybody was laughing and happy, I felt like she wasn’t so happy.

They kept on discussing, “Good that it happened at 13. Otherwise for some girls it comes at 15. You know my sister’s daughter, she —.”

Kinni came into the hall. She was eating cashew nuts. She gave some to me.

“Why didn’t you tell me there would be a function in your house?” I asked her.
Her mouth was full of nuts. She said, “I din oh”
“What?”
“I didn’t know.”
“And why aren’t you wearing a new dress like Sangita?”
“I had a fight with mother yesterday because she didn’t stitch me a new dress. But she said it’s Sangita’s special day. She got her first menses.”
“What is that?”
“I don’t know.”
“But your grandmother said Sangita got a mute son. She was joking, I think. Or is it the same?”
“Maybe.”

There was a delicious feast and I ate a lot. My mother came a little late.
After we came back home, she started telling me, how I should behave, how I should take a proper wash after coming back from school, and how I should not go to a feast without an invitation.

“But mother, its Kinni’s house. I don’t need any invitation.”
“Minu, did you see any kids there today?”
“But Kinni was there too.”
“It is her house. Where will she go?”
“Mother, you know, Kinni’s grandmother told me that Sangita got a mute son and then everyone laughed. But Kinni told me some different word. First something. I forgot. What is a mute son?”
“Minu have you seen any pregnant man?”
I started laughing, “Mother —“

“Because only a woman can give birth. Every little girl will become a woman after a certain age and she becomes capable of giving birth. Old women have their own style of describing such things. When a baby is born it cries. Today there is no actual baby to cry but there is a hope to have a baby in the future. That may be the reason they call it ‘mute’ son.”

“Hmm. Means when Sangita will be like you or her mother, she will have a son. Right?”
Mother nodded and smiled. But I still had questions, “Mother when you were like Sangita, did they say you got a ‘mute daughter’ because you don’t have a son?”
She paused for a second and said, “Yes of course.” She pulled me close and said smiling, “That’s why I got you and Sonu.”
I was so happy to hear that.

A few days later I was playing with Kinni at her place in the verandah. After a while we heard the raised voices of Sangita and her mother. Sangita was crying. We heard her saying,
“No mother, I will never sit in the corner of the hall in those days. If my friends come here and see me like that I will feel ashamed.”
Her mother said, “Nobody will say anything.  And listen I will not allow you to roam around the house in those days. If you don’t like that corner, you have to sit somewhere separately.”
“No mother. I won’t!” Sangita was sobbing.

“Kinni’s mother, will you please stop that discussion?” we heard Kinni’s father.
“Sangita will not sit in some corner or anywhere in those days. Try to understand. You have a faith in these traditions so in spite of my urging you are following it. We had this discussion in the past too. Try to look at it logically. Is it some kind of contagious disease? Why she should not touch anything? Tell me what is the need for her to remain separate? ”
“Don’t tell me about logic. She is just 13 and doesn’t understand a thing. But if you are going to support her, one thing I am telling you – in those 4 days she will not enter in my kitchen. ”
“Ok, ok. So she is not allowed in the kitchen. No problem. Sangita now smile my child. At least we could break some ice! Something is better than nothing.”

“And she will not come to the temple or participate in rituals or festivals in those days.” Her mother continued. She was still not satisfied. She kept mumbling, “These are girls. We have to teach them all our traditions. But who will listen to me— what the people will say—“

I looked at Kinni. Her eyes were filled with tears.
You know —