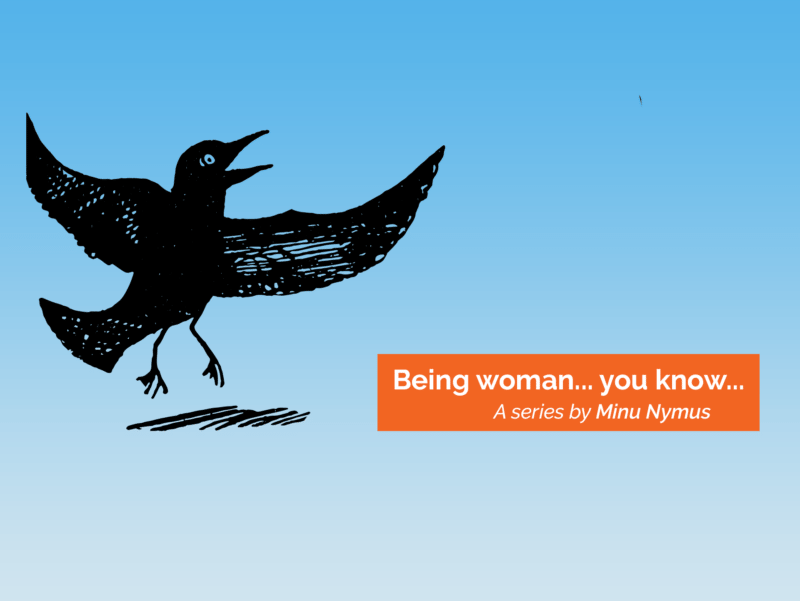 Touch of the crow

I was 8 or 9 years old I think. I was playing with Kinni, my neighborhood friend at her place. We were running down the hall, dodging each other and giggling. Kinni’s mother was sitting on a mattress in a corner of the hall. Whenever we would go near the corner, she would say, “Be careful girls. You will touch me. Go and play in the verandah.”

Though this was not a new scenario in Kinni’s house, I always wondered why her mother would just sit in the corner for 3 to 4 days at random, and not allow anybody to touch her. One thing that amazed me the most was, whenever her mother would sit in that corner, it was always because a crow had touched her in the morning! Can you believe it!

Sometimes Kinni would say, “Today my father is going to cook something. Sangita will help him. My mother won’t be able to cook for next 3 days. The crow touched her today.”

My mind might have accepted this as a naturally occurring incidence in Kinni’s house. But I was curious about it. One day I asked my mother, “Why does the crow only touch Kinni’s mother? Why doesn’t it touch me or Kinni or Kinni’s father? It doesn’t even touch you! What’s wrong with Kinni’s mother?”

My mother was busy doing some work. She smiled and put a hand on my head. She said, “Hmm. It’s nothing wrong with Kinni’s mother. Now go, I am really very busy.”

Day by day, my curiosity about this mysterious crow went on increasing. One day we were in the backyard. It was pleasant Sunday morning. We had washed our long hair and were sitting under the sun to dry them.  There was my mother, my little sister Sonu, me, Kinni, and her elder sister Sangita. Kinni’s mother was inside her house standing by the window chatting with my mother.  There were trees around. Birds were flying and chirping. Suddenly I saw a crow sitting on a fence. Sonu was playing with her doll nearby. I panicked and shouted, “Sonu, come here fast. The crow will touch you!”

My mother and Kinni’s mother started looking at me and then burst out laughing. Sangita also started laughing. I was astonished to see their reactions. Even Kinni looked surprised. I shouted, “Why are you laughing?”

My mother said, “Minu, come here. Baba has brought some comic books you wanted to read.” I loved reading books, especially comics; so much that I forgot everything and went inside.

In spite of the efforts of the elders to make me ignore such curious things, I was very observant. I had noticed one thing. Usually, when Kinni’s mother declared that the crow had touched her she would’ve had just come out of the bathroom. The door of her bathroom opened in the verandah near the backyard. Naturally, I concluded that the crow must be coming from that side.

Many times in the morning I would sit in the backyard reading something, but keep one eye on the crow to see if it would come. But not a single time did I ever see the crow nearby when Kinni’s mother was having her bath. One day she declared again that the crow had touched her and as usual she sat in the corner of the hall. But that day too I had observed the backyard in the morning while she was having a bath and I was pretty sure that no crow had come there. The mystery deepened.
Either Kinni’s mother was lying or the crow must be invisible! Eventually, I stopped talking about it with the elders. They would not tell me anything.

My parents had a fantastic collection of books. When I was 11, I started enjoying these books, besides my beloved comics. I could read any book I wanted to. Most of them were written in a very high-level language and for my age, I could not understand the meaning of some sentences. In one such book, there was a mention of something which suggested that the secret of Kinni’s mother was actually an open secret of all the women in the world. That day, the invisible crow suddenly vanished from the depths of my mind.