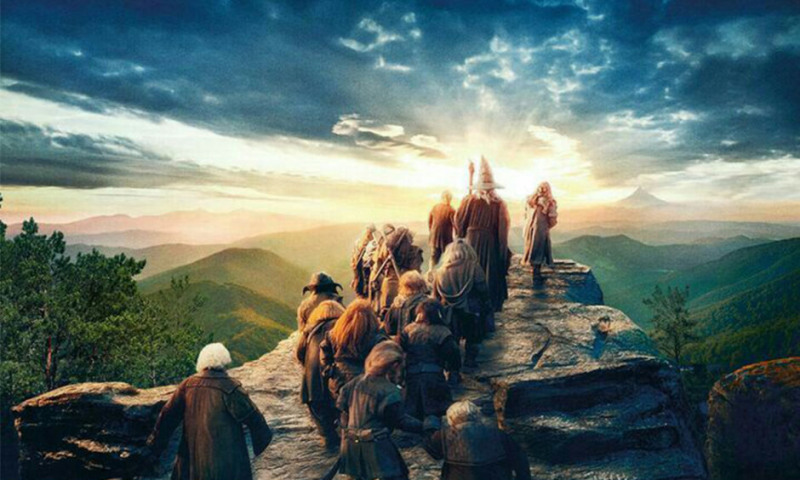 Understanding settings with “The Hobbit”

The world your character lives in has started taking a beautiful shape in your mind. All that needs to be done is putting it on paper so that you can share it with your audience. Sounds simple right?

Would you write a blob of text that goes on describing the setting till you think you’ve done enough justice to it? (That would make up an entire book in itself.) Or would you rather reveal the setting to your audience without letting the focus shift from your characters in an effortless way?

The second one sounds appealing because it not only creates a better chemistry between your characters and the setting but also gives the story a seamless flow.

Using examples from J.R.R Tolkien’s, “The Hobbit“, let’s see a few tips that will help you write vivid settings that are well embedded in the story:

Use your character and the mood as a channel

UP JUMPED BILBO, and putting on his dressing-gown went into the dining room. There he saw nobody, but all the signs of a large and hurried breakfast. There was a fearful mess in the room, and piles of unwashed crocks in the kitchen. Nearly every post and pan he possessed seemed to have been used. The washing-up was so dismally real that Bilbo was forced to believe that the party of the night before had not been part of his bad dreams, as he had rather hoped.

In this excerpt, there are a few interesting elements to note:

– What Bilbo notices first; not the general interior of the kitchen that he must be accustomed to, but what stands out for him.

– There is a hint of disappointment in the air that is evident from the line ‘…Bilbo was forced to believe that the party of the night before had not been part of his bad dreams, as he had rather hoped’. The description of the kitchen goes hand in hand with this mood.

– There is a personal touch to the setting: “Nearly every post and pan he possessed…” that embeds character into the setting. Without it, we wouldn’t have been able to connect with Bilbo as much.

Use all the senses

One morning they forded a river at a wide shallow place full of the noise of stones and foam. The far bank was steep and slippery. When they got to the top of it, leading their ponies, they saw the great mountains had marched down very near to them.

Seeing is believing. It would be great if the reader can see what you imagine. It would be even better if they can feel the setting too. This act of feeling can be brought out by using all the senses to their fullest in your description. ‘The noise of stones and foam,’  and  ‘the far bank being slippery’  serve this purpose.

Keep only the relevant details

He (Bilbo) still wandered on, out of the little high valley, over its edge and down the slopes beyond; but all the while a very uncomfortable thought was growing inside him.

The description of how the flora and fauna might’ve been in this valley. Why? Because it isn’t relevant to Bilbo’s mood.

Imagine you are writing a car chase and you spend a paragraph describing how beautiful the interiors of the car look. That would defy the thrill of the chase. If, however, you described how fast the car could go, it would be a better read. Ideally, showing how fast it can go is the best approach.

The sun had long gone behind the mountains. Already the shadows were deepening about them, though far away through the trees and over the black tops of those growing lower down they still could see the evening lights of the plains beyond.

Light is a strong tool to set the required ambience. Scary alleyways are dark. A setting with a warm light coming from a fireplace will come out as cozy without much effort. Vision comprises almost 80% of the sensory inputs we actively process, so describing the lighting gives readers a much clearer picture.

The toughest part can sometimes be describing settings that are completely fictional and mapping them to the everyday experience of the reader. But there is no greater pleasure than being able to bring a fantasy world alive!

Have you written a setting that you’re proud of? Let us know in the comments below!