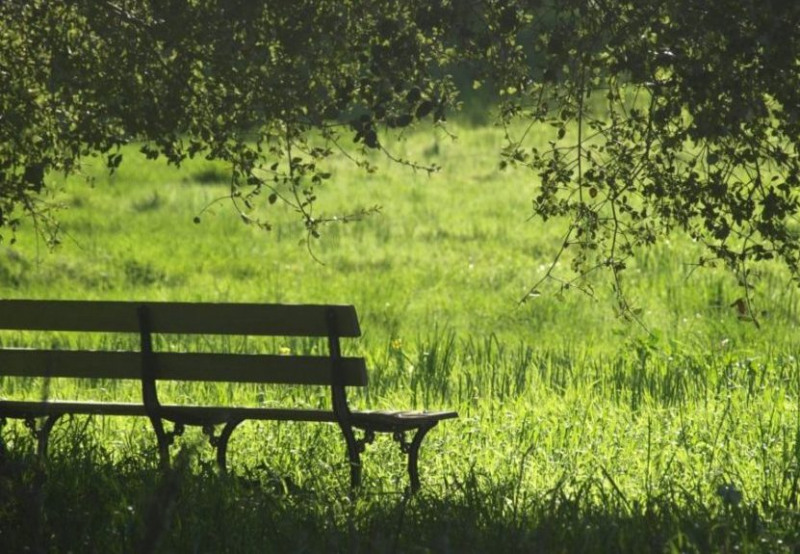 She was sitting on a bench in a park. It was dusk and the sky was filled with different colors of the sunset. The wind was blowing through her pitch black hair. It caressed her golden skin. Her eyes were closed. She could hear the voices of the people around her.

A girl was talking on her phone like every day.
‘Work has been worse… when will you get home? I love you.’
She’ll be married in a few days. A smile flashed across her face. The girl had been planning her wedding with such enthusiasm; everything had to be perfect. Maybe that’s why she ran two extra rounds today.

She saw the usual group of women passing by. They would always be complaining about something or the other; their kids, the inflation, their husbands. Why did they just complain all the time? Were they crushed by their responsibilities or simply venting out?

‘Excuse me ladies, thank you,’ a man ran through their group.
Here goes the businessman.
‘Fix my meeting with him today in afternoon at 3…  Get the reports ready… This deal…’ He had started coming here only recently. Maybe due to his elevated cholesterol levels. She had heard him schedule appointments at the hospital.

This was her routine ever since she’d been discharged from the hospital three months ago. She would sit in different parks, stations or restaurants, observing people and weaving stories around them.

‘Hey. I am Robert. Are you waiting for someone?’ she looked up. It was a familiar face. She used to see him almost every day, taking a walk in the park, they would exchange smiles but they had never quite talked. He seemed to be in his late sixties. He was dressed handsomely, in a white shirt and black pants. His eyes are so warm and friendly. But why is he talking to me? Should I be talking to a stranger?

She stared at him blankly.
‘You can talk to me instead of just sitting by yourself. ‘
She managed a weak smile. He sat down at the other end of the bench.
‘Oh! You’re not a robot then!’ he said jokingly.
She wetted her chapped lips. He could clearly notice her struggle to speak.

‘Do you have any dreams?’ her voice sounded hoarse. She hadn’t spoken in quite some time. That’s not the first thing you say to strangers! Stupid me.

‘It’s quite simple, really. I want to create and live as many beautiful memories with all my loved ones, till the day I die,’ he said. He answered so easily, she might as well have asked how many spoons of sugar he liked in his tea.

He continued, ‘You see I have a funny disease called Alzheimer’s. Fries my brain and forces me to forget things and people. I want to stock up as many memories as possible so that even if one or two get wiped I will always have the others with me.’

She turned to look at him. “I’m sorry,” she said.
He noticed the helpless look on her face. She was feeling bad for him. She wasn’t numb after all.
‘You understand knowing what’s wrong with you is a lot better than being ignorant, right?’ he asked.
She looked alarmed and slightly stunned. She felt like he could see through her; through her facade.

‘We humans are smart creatures.  We know exactly when something’s wrong. But we don’t do anything about it. We punish ourselves by giving up on our hope and dreams because we think it’s all our fault. We think we deserve the misery. It wasn’t your fault, you don’t deserve this.’

Her eyes brimmed with tears. She told him how she’d lost her husband and her baby, her feelings pouring out through her tears. She said she never wanted the pain to go away because that way she felt closer to them.

‘Regret is a very heavy feeling my child. You really don’t want to go that way.  There are small things that make us human, that make happy and less miserable. And if we have chances of having these, we shouldn’t miss out on them.’

She had cried her heart out for the first time in about three months. Maybe the old man was right. It was time she let go.

Since that day, for all the other times that they met at the park, she had her own stories to tell, her little experiences to share and he had his own memories. They had both managed to find their meanings in life.

One who is quirky and misfit here,one who cannot be stereotyped, one who believes in spirit of her name, is Janhavi...