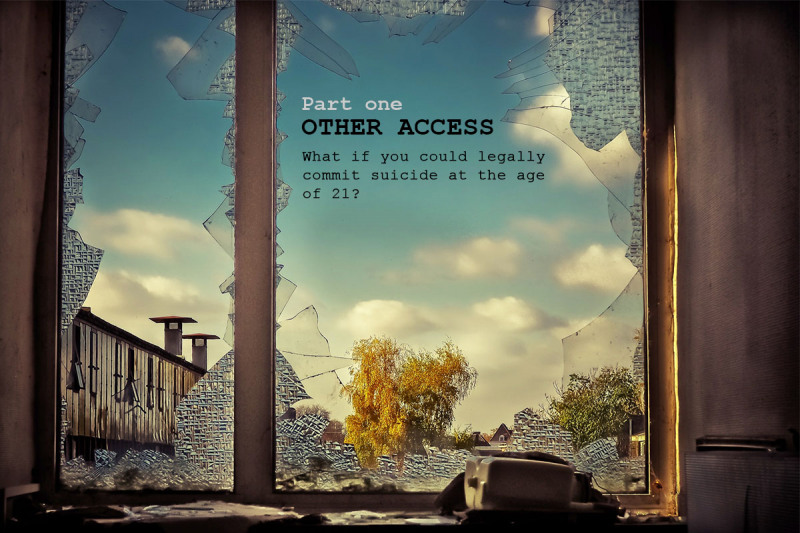 ‘It’s called _other access. I’ll show you on Thursday. Don’t tell anyone,’ Sirek had said.

Sirek had been acting weird for a few weeks. He would forget his assignments, come late to the Education Center, and get irritated for no reason. Often times, he would go into a contemplative silence, ignoring everyone around him.

Pyrel sat on the old couch in the living room, watching the evening Martyr update broadcast with his mother. The television announcer would read the names of the martyrs every few seconds.
‘Jorel Gioris, Poliya Miuchik, Velie Wischt, Sirek Filip.’
Pyrel sat upright. Sirek’s name was flashing on the screen.

Sirek Filip – Age 21
Last words:
“For my parents who can now lead better lives.”
2.2 million credits to be awarded to the Filip family.

Sirek’s face appeared on the screen for a brief instant next to his name; damp hair, watery eyes, pug-like round nose, and a stout upper lip.

‘Why?’ Pyrel whispered.
‘Isn’t that your friend from the Education Center?’ Pyrel’s mother asked.
‘Yes, he is.’
‘Some have no purpose,’ she said.
Pyrel nodded.
How could she be so heartless? Tears welled up in his eyes and he wiped them off quickly.

‘Don’t tell me you are going to cry for him. You are much smarter and much more deserving than people like Sirek. The way I see it, it’s just less unnecessary competition,’ his mother said.

But he is dead! Pyrel shouted in his head.
Why did Sirek do this? Didn’t he want to tell him something important about other access?
The only thing Pyrel remembered about other access was in a book in his father’s collection. Even then, it was only a footnote, something he would’ve ignored had it not been for the peculiar name.
‘Other access is a hacking technique, used to gain access to the internet of the entire world.’
That had stuck with Pyrel and he’d wondered why he would even want to do such a thing. The outside world was a place of horror, despair, and nuclear devastation. But Sirek had sounded so hopeful.
‘There’s more to everything,’ he had said.

‘What did Master Garth tell you today?’ Pyrel’s mother asked.
Pyrel snapped out of his thoughts.
Master Garth was his instructor from the Education Center.
‘He said I might still be able to serve my purpose.’
‘That is good news. We must ensure that your father’s martyrdom is not in vain,’ she said.
‘Yes, mother.’
‘Serve your purpose well Pyrel. If you get a good job, your sister will also be seen in high regard.’
‘Yes, mother.’
‘Go to your room and study now.’

Pyrel got up and walked out of the living room, his head buzzing with a thousand thoughts. His mother was an instructor at the Education Center for Excellency in Resource Management. Like all instructors Pyrel knew, she was curt, honest, and unbearable.

My purpose, he thought as he entered his room.
Twelve years ago, the Government had told him his purpose. If he managed to learn all the skills they said he could learn, he would get a job, get credits for his good work, be able to marry and live till a respectable age of 60.

If not – he would be cast away; looked upon as a liability and ultimately driven to the Martyr Dome to breathe his last.
When he was nine years old, Pyrel had taken the Olgamarf Purpose Test. He had received a small envelope two weeks later. Inside was a letter that read:
‘Pyrel purpose will be to design and construct software and write code that allows the government to function more efficiently. He will be joining the Education Center for Excellency in Computing from the 5th day of June 2009. Failure to do so will result in a credit cut for the Sesta family.’

From a life of learning mundane arithmetic and basic languages, Pyrel had been sent to an Education Center and introduced to the world of computers and coding. Most of the other children had to give another test at the age of 12 to be allocated a purpose. Some didn’t find their purpose until the last test, at the age of 15. If someone didn’t pass all three tests, they had to wait for 6 years before being sent to the Martyr Domes to sleep peacefully.

What did Sirek want to tell me? Pyrel thought as he closed the curtains and sat down on his rickety bed. The muffled rays of the evening sun cast a ghastly red glow around his tiny room. Pyrel opened a drawer by his bedside and picked up a blade.

I shouldn’t have lied to mother, he thought.
He pulled his pant up and laid his left leg across the bed. He kept the cold blade on his left thigh and took a deep breath. With one quick motion, he had made a cut across his thigh.
“I am a bad son. I shouldn’t have lied,” he whispered.

He scraped around the cut, squeezing out more blood, muttering to himself, consoling himself. The lie was necessary, his mother would have been very angry otherwise, but he shouldn’t have lied. Lying was wrong. They had made sure he learned that in the Education Center. He had spent an entire night once, locked up in a dark room, hanging upside down on chains.

Lying is wrong, the guard had screamed at him.
Lying is wrong. He had to repeat it, over and over again, until he was numb from the pain in his throbbing head.
‘Lying is wrong,’ Pyrel muttered, scraping more blood out as the tears fell.

A few minutes later, he wiped the blood off the blade and pulled his pant back down. He felt strangely good. He deserved the pain; he had cleared his conscience now.

He leaned back on his bed and opened a book. Master Garth, his instructor at the Education Center had been very clear yesterday. He did not like Pyrel and he was going to make sure he didn’t recommend him.

‘Pyrel Sesta,’ Master Garth had said, ‘your behavior and attitude towards your education has been disappointing. Although you are a good worker and efficient in your approach, the lack of respect you have for your instructors is a strong indicator of your underlying rebellious nature. You do not listen to our instructions and you prefer wasting your time doing unnecessary things that are not a part of your curriculum. I will not be recommending you for a job. If anybody wishes to recruit you, you may get the opportunity to serve our people through your work.’

And if not, Pyrel had thought, you will die, just like Sirek did, just like your father did. You will die and they will flash your name once in the martyr update, and then they will all forget about you.