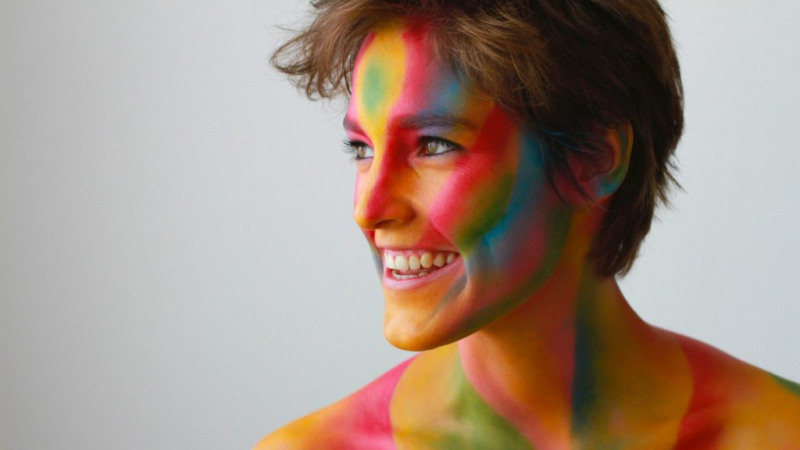 
Why, she wondered do I always look like a kid trying on her mother’s makeup?

That was Emma Morley, one of my favorite characters by David Nicholls. I resonate with that quote so well. I’ve always felt like a kid who’s gotten her makeup all wrong whenever I’ve tried. However that hasn’t stopped me from putting on a bit on special occasions. I like how the little tint of red on my lips makes me feel.

I haven’t ever bothered to give makeup much thought before this. Then why write about it now?

I’ve come to realise only recently how makeup is an inextricable part of our lives. We either wear some ourselves or are surrounded by people who do.

Women who put “too much makeup ” are made fun of and the ones with imperfections are made to feel like they need all the cosmetics ever manufactured to get a flawless skin. And that’s not even the end of it. Once you get that, you need a glow. Crystals, diamonds and rubies, make your skin look like them. There’s so much more after that too, hiding your wrinkles, dark circles and other signs of aging that you won’t even know of. Apparently, there are 7.

Makeup started to confuse me. That was when I thought of asking my friends for their viewpoints. I sent out a google form which had a question, “What are your opinions about women who wear makeup?”.

I got more than 30 responses, all filled with amazing answers.

Here’s a few accompanied by what I inferred from them. Don’t worry, I won’t include any makeup tips or hacks.

“Women who wear makeup care about looking good. If they feel they look good, it makes them feel confident and beautiful. That is a positive result of makeup.”

“I would admit that there is something empowering about wearing makeup, or I might say ‘a stroke of red lipstick can stroke your pride and help lift you up on dull days.’ So basically it is a matter of personal choice! I understand that it is better to be comfortable with your own skin and complexion, but that’s easier said than done. If you are not happy with some part of your face (say a fat nose) and you have an option out there with which you can rectify it, then why not?”

Makeup can help you fill up the confidence gap. However, there’s one crucial point that needs to be considered. Does it mean that makeup gets you the confidence? I don’t think so. This confidence is not external. Makeup just helps you bring it to your face. And if something helps you do that, you might as well use it.

“I love it when makeup gives someone confidence. Much like dressing though, some makeup can be inappropriate in certain settings.”

Makeup is already a tricky concept to understand. On top of that, if one overdoes it in situations where one shouldn’t, I wouldn’t blame people for subjecting her to unpleasant looks.

There are certain unsaid codes the society follows and barring a few, most of them are quite sensible. You can dress up casually for a wedding. That shouldn’t be much of a problem but it would be a little inappropriate if you dress up in a shimmery golden lehenga for a funeral. The same goes with makeup. One shouldn’t go all ‘Lady Gaga’ on days when it’s inappropriate.

“I think fake it till you make it doesn’t work in case of makeup! 😛 Better keep it as natural as possible.”

There will be times when a woman wouldn’t want to wear any makeup. For example, while on a tropical camping vacation or while just going for some everyday grocery shopping. In such situations, she would literally have to be able to be comfortable in her own skin.

There are so many factors that we naturally keep in mind while making up our minds about what we want to look like on a particular day. The intricate thought process here is probably finer than your eyeliner and lot more colourful than any shade of eyeshadow.

Makeup can be looked at like any other art form and thus demands discipline and balance. Other than that, it’s lots of fun.

I thank all the beautiful girls out there who helped me put this up together. Since the Google form was anonymous, the quotes don’t have names. In case you want your name to be put up along with your quote, feel free to ping me.